“In practice, reversal and recovery should be guided by adductor pollicis response, and if needed, a switch from facial to ulnar nerve stimulation should be accomplished at the end of the surgical procedure.”

PERSISTING neuromuscular blockade after anesthesia, commonly referred to as residual paralysis, is a well-recognized entity, but anesthesiologists do not always apply sound principles into clinical practice. This issue of ANESTHESIOLOGY contains yet another report describing an unacceptably high incidence of measured train-of-four (TOF) ratio less than 0.9 (42%) in the postanesthesia recovery unit (PACU), in spite of widespread use of neuromuscular monitoring.1This situation occurred because the well-known differences in the responses of muscles at different monitoring sites were ignored or misinterpreted.

There has been some confusion in the literature regarding the name of the muscle that moves the eyebrow in response to facial nerve stimulation. Earlier studies erroneously attributed the response to the orbicularis oculi.2But movement of the eyebrow is because of the corrugator supercilii, which is solicited when frowning.8Irrespective of the name of the muscle that contracts in response to facial nerve stimulation, the results of eyebrow twitching studies are clear: muscles around the eye recover early, much like the diaphragm, and earlier than upper airway muscles or the adductor pollicis.2,8It follows that facial nerve stimulation should not be used to guide reversal and recovery.

Dose and timing recommendations for reversal are based on recovery at the adductor pollicis. When the recognized target for neuromuscular recovery was a TOF ratio of 0.7, it was suggested to administer neostigmine when at least two twitches were visible. With the new TOF threshold of 0.9, it is advisable to wait until four twitches are present, whether there is detectable fade or not.9However, these recommendations apply only to the adductor pollicis. It is expected that when four twitches are seen at the corrugator supercilii, the adductor pollicis twitch count might be less, and there could be no twitch at all. Thus, if the timing of neostigmine administration is based on facial nerve monitoring, and even if four eyebrow responses are detected, the risk of residual paralysis is expected to be high. This is exactly what Thilen et al.  1found in this issue of ANESTHESIOLOGY. They measured adductor pollicis TOF ratio by acceleromyography in the PACU in patients who had their intraoperative neuromuscular monitoring performed at the thumb or the eye, according to the preference of the anesthesiologist. A TOF ratio less than 0.9 in the PACU was more frequent in patients monitored at the eye in the operating room (52%) than in patients monitored at the thumb (22%), in spite of a comparable number of twitches seen in both groups: four twitches were seen in most patients, whether monitoring site was the eye (86%) or the thumb (88%). Interestingly, the eye was chosen as the monitoring site in two thirds of cases, suggesting that the known differences between monitoring sites were not appreciated by most anesthesiologists. The message here is clear: monitoring to guide reversal and recovery should be performed at the adductor pollicis muscle.

Still, the study by Thilen et al.  raises a few questions. Why, for example, did as many as 22% of patients monitored at the wrist have a TOF ratio less than 0.9 when reasonable doses of neostigmine were usually given, four twitches were seen in most patients, and assessment in the PACU was carried out after neostigmine had time to be effective (20 min)? The patients who had inadequate recovery may have received neostigmine when fewer than four twitches were visible, or were evaluated a short time after neostigmine, or did not receive any neostigmine. But another factor might play a role: there are subtle sensitivity differences between the different intrinsic muscles of the hand. The muscles of the hypothenar eminence, which move the little finger, recover earlier than the adductor pollicis.10In practice, it is not uncommon to observe four twitches at the little finger when there is only one or none at all at the thumb. Thus, it is possible that in some instances, recovery at the little finger was interpreted as “four twitches present,” although fewer were in fact present at the adductor pollicis. It is suggested to either feel the movement of the thumb to assess readiness for reversal or stimulate over the adductor pollicis muscle.11

The ultimate objective is to avoid the complications of residual paralysis, and evidence suggests that the risk of adverse events,7subjective feeling of weakness,12and length of stay in the PACU13increase markedly when TOF ratio at the adductor pollicis is less than 0.9. This does not mean that there is a cliff at an adductor pollicis TOF ratio of 0.9. Some patients do well in spite of a TOF ratio less than 0.9, whereas others might have difficulties in spite of a TOF ratio greater than 0.9. In Thilen et al. ’s1study, two patients with a TOF ratio of zero felt weak, but did not need active treatment. However, in terms of risk management, the incidence and severity of residual paralysis increase as the TOF ratio decreases. For example, Murphy et al.  7studied patients in whom respiratory difficulties were detected in the PACU, and compared them with a control group without such events. Mean TOF ratio was 0.62 in the subjects with respiratory complications, and only 9.5% had a TOF ratio of more than 0.9. In contrast, mean TOF ratio was 0.98 in the control group, and 90.5% of patients had a TOF ratio of more than 0.9. From these and other data, a mental model for the risk of complications from residual paralysis can be derived (fig. 1). The actual shape of the curve certainly depends on the definition of complications and type of patient. Because the weak link in neuromuscular recovery is the upper airway, it is likely that the curve is pushed to the right, meaning increased risk, in patients with conditions where either respiratory function as a whole and/or airway patency are compromised. Although in most patients most of the upper airway muscles have a similar recovery profile as the adductor pollicis, recovery of some muscles in some individuals might be delayed, with subsequent risk for impaired airway integrity even after recovery to an adductor pollicis TOF of close to 1.0. There is no direct evidence to help identify which individuals may be susceptible to delayed upper airway recovery, but it would appear prudent to pay special attention to patients at risk. 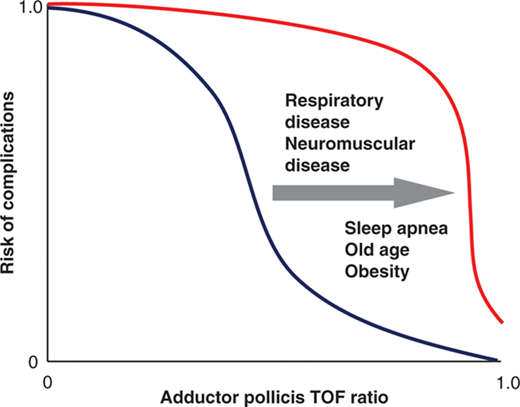 Fig. 1. Likely relationship between risk of respiratory complications and train-of-four (TOF) ratio at the adductor pollicis. The exact shape and position of the curve for normal patients (blue ) depend on the definition of “complication,” and are not known for certain. Some conditions are likely to shift (arrow ) the curve to the right (red ), as might occur with the examples given. There are no hard data on the specific conditions and the extent of the shift.

Fig. 1. Likely relationship between risk of respiratory complications and train-of-four (TOF) ratio at the adductor pollicis. The exact shape and position of the curve for normal patients (blue ) depend on the definition of “complication,” and are not known for certain. Some conditions are likely to shift (arrow ) the curve to the right (red ), as might occur with the examples given. There are no hard data on the specific conditions and the extent of the shift.

The clinical study performed by Thilen et al.  1confirms what other studies indicated: ulnar nerve-adductor pollicis rather than facial nerve-corrugator supercilii monitoring should be used as a guide to timing of reversal or adequacy of recovery. The presence of four twitches at the adductor pollicis or the thumb following ulnar nerve stimulation should be ascertained before administration of neostigmine. Movement of the thumb should be seen or felt, disregarding movement of other fingers. The same principles apply when using sugammadex, because the proper dose depends on recovery at the thumb, not at the eye. When considering neuromuscular recovery, the corrugator supercilii behaves like the diaphragm, but it takes more than the diaphragm to breathe adequately; upper airway muscles, which follow approximately the same recovery profile as the adductor pollicis, are important respiratory muscles. In practice, reversal and recovery should be guided by adductor pollicis response, and if needed, a switch from facial to ulnar nerve stimulation should be accomplished at the end of the surgical procedure. There is more than meets the eye; a hand is needed.

D’Honneur G, Guignard B, Slavov V, Ruggier R, Duvaldestin P. Comparison of the neuromuscular blocking effect of atracurium and vecuronium on the adductor pollicis and the geniohyoid muscle in humans. ANESTHESIOLOGY. 1995;82:649–54

Plaud B, Debaene B, Donati F. The corrugator supercilii. not the orbicularis oculi. reflects rocuronium neuromuscular blockade at the laryngeal adductor muscles. ANESTHESIOLOGY. 2001;95:96–101

Nepveu ME, Donati F, Fortier LP. Train-of-four stimulation for adductor pollicis neuromuscular monitoring can be applied at the wrist or over the hand. Anesth Analg. 2005;100:149–54