Cecil Hotel is a budget hotel located at 640 S. Main Street, opened on December 20, 1924.[5][1] The hotel was renamed Stay On Main as an effort to distance the establishment from its dark past. The 19-floor hotel has 700 guest rooms. The hotel has a checkered history, with many suicides and deaths occurring there. The hotel is currently closed, renovations started in 2017 having been suspended.[3][6][7] 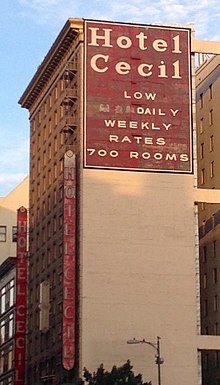 The Cecil was built in 1924[8] by three hoteliers—William Banks Hanner, Charles L. Dix and Robert H. Schops—[9] as a destination for business travelers and tourists.[4] Designed by Loy Lester Smith in the Beaux Arts style, and constructed by W. W. Paden,[10] the hotel cost $1.5 million to complete and boasted an opulent marble lobby with stained-glass windows, potted palms, and alabaster statuary. The three hoteliers invested about $2.5 million[10] in the enterprise, with the knowledge that several similar hotels had been established elsewhere downtown, but within five years of its opening, the United States sank into the Great Depression. Although the hotel flourished as a fashionable destination throughout the 1940s[citation needed], the decades beyond saw the hotel decline, as the nearby area known as Skid Row became increasingly populated with transients.[3] As many as 10,000 homeless people lived within a four-mile (6 km) radius.[11]

The iconic advertisement on the right side of the building originally had the word Monthly. The remains of the first letters can still be seen and this is why the current word Daily is aligned on the right side unlike the other rows.[12]

In 2007, a portion of the hotel was refurbished after new owners took over from there.[11]

In 2011, part of the Cecil Hotel was rebranded as Stay on Main,[13] with separate reception areas during the day, but with shared facilities[14] and its official website remained thececilhotel.com.

In 2014, the hotel was sold to New York City hotelier Richard Born for $30 million,[15] after which another New York-based firm, Simon Baron Development, acquired a 99-year ground lease on the property.[4] In 2016, Matt Baron, president of Simon Baron, said he was committed to the preservation of architecturally or historically significant components of the building, such as the hotels grand lobby, but his company planned to completely redevelop the interior and fix the hodgepodge work that had been done in more recent years.[16] The hotel closed in 2017 for the renovation, but the work was suspended indefinitely when the COVID-19 pandemic hit.[17][18][3][6][7]

In February 2017, the Los Angeles City Council voted to deem the Cecil a Historic-Cultural Monument, because it is representative of an early 20th-century American hotel and because of the historic significance of its architects body of work.[19]

Reputation for violence, suicide and murder[edit]

The first documented suicide at the Cecil occurred on the evening of January 22, 1927, when Percy Ormond Cook, 52, shot himself in the head while inside his hotel room after failing to reconcile with his wife and child. The Los Angeles Times reported that he was rushed to The Receiving Hospital with a slim chance of survival; death records reveal that he died that same evening.[5] The next reported death occurred in 1931 when a guest, W. K. Norton, died in his room after taking poison capsules.[20] Throughout the 1940s and 1950s, more suicides at the Cecil occurred.[5] In 2008, two long-time residents referred to the Cecil as The Suicide,[21] and it became a popular nickname in social media years later.[20] RoomSpook, a website that tracks hotel deaths, lists at least 13 suicides that happened at the hotel.[22]

In addition to suicides, the Cecils history includes other violence and disturbing happenings. It also became a notorious rendezvous spot for adulterous couples, drug activity and a common ground for sex workers.[20]

In 2015, while researching the Cecil Hotel for an article for KCET, researcher Hadley Meares claimed that in 1947, Elizabeth Short, dubbed by the media as the Black Dahlia, was rumored to have been seen drinking at the Cecils bar in the days before her notorious and unsolved murder.[20] However, this claim appears to be nothing more than the retelling of a long forgotten falsehood that first appeared in a 1995 column written by Los Angeles Times scribe Steve Harvey. Without fact-checking the claim, Harvey had quoted Ken Schessler, author of the book, This is Hollywood, as saying: “On Jan. 11, 1947, just three days before she was murdered, the Black Dahlia was seen in the bar in the Cecil Hotel with a girlfriend and two sailors.” Schessler then added, “In fact, the hotel and the bars in the same block, including the Dugout next door, were some of Elizabeth Short’s favorite hangouts during the week before she was killed.”[23] Schesslers Black Dahlia claim is easy to disprove. According to LAPD records, Short was last seen alive at the Millennium Biltmore Hotel on January 9 and was not seen again until her body was discovered in an empty field on January 15. There are no known records of Elizabeth Short ever being at the Cecil Hotel.[24]

In 1964, a retired telemarketer named Pigeon Goldie Osgood, who had been a well-known and well-liked long-term resident at the hotel, was found dead in her room. She had been raped, stabbed, beaten and her room ransacked.[25] Jacques B. Ehlinger was charged with Osgoods murder because he was seen covered in blood roaming the streets close to the hotel, but was later cleared as a suspect.[26] Her murder remains unsolved.[27]

Perhaps most infamously, in the 1980s, the hotel may have been the residence of serial killer Richard Ramirez, nicknamed the Night Stalker. Ramirez was a regular presence on the skid row area of Los Angeles and according to a hotel clerk who claims to have spoken to him, Ramirez is rumored to have stayed at the Cecil for a few weeks.[20] Ramirez may have engaged in part of his killing spree while staying there.[28] On August 30, 1985, a group of Los Angeles residents spotted him in the street and prevented him from escaping until police arrived to arrest him. In 1989, Ramirez was convicted of 13 murders and sentenced to death by the gas chamber — though he would ultimately succumb to cancer in 2013 while still awaiting his fate on death row.[29] Another serial killer, Austrian Jack Unterweger, stayed at the Cecil in 1991, possibly because he sought to copy Ramirezs crimes.[30] While there, he strangled and killed at least three sex workers, for which he was convicted in Austria.

In 2013, the Cecil (by then re-branded as the Stay on Main although still maintaining the original Hotel Cecil signs and painted advertisements on its exterior) became the focus of renewed attention when surveillance footage of a young Canadian student, Elisa Lam, behaving erratically in the hotels elevator, went viral. The video depicts Lam repeatedly pressing the elevators buttons, walking in and out of the elevator and possibly attempting to hide from someone. It was recorded shortly before her disappearance; subsequently, her naked body was discovered in a water supply cistern on the hotel roof, following complaints from residents of odd-tasting water and low pressure. How she got into the cistern remains a mystery.[31] The floor Lam stayed on was one of the floors that did not have security footage, which left uncertainty as to whether her death was a homicide, until Lam’s sister had revealed to detectives that Lam had a history of not taking her medication. Among her possessions left at the hotel were several prescription medications, seemingly untouched. Lam had previously been diagnosed with an extreme form of bipolar disorder.[32] Thus, police ruled that her erratic behavior on the elevator was caused by hallucination, and she stepped into the tank herself, believing that she was in danger. The Los Angeles County Coroner ruled her death accidental due to drowning, with bipolar disorder being a significant factor.[33]