With the rising number of electric vehicles (EVs) on the roads, the market for electric vehicle charging companies looks obvious. That explains the euphoria surrounding EV charging stocks. Even after falling 45% off its high price in 2021, Blink Charging (NASDAQ:BLNK) stock is up 450% from its levels a year ago. Similarly, ChargePoint (NYSE:CHPT) stock is up roughly 155% since it announced plans to go public via a special purpose acquisition company last September. Lets analyze which of the two EV charging stocks looks better right now.

ChargePoint is the EV charging leader 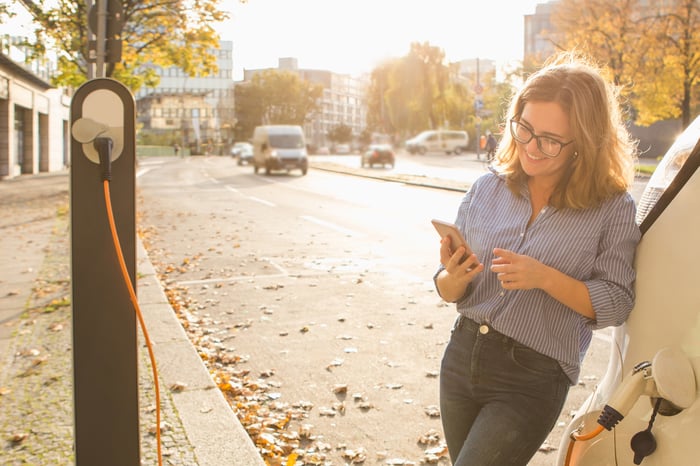 ChargePoint claims to have a market share of more than 70% in the level 2 segment, which is the most common type of public charger currently in use. So, ChargePoint has a bigger network, generates higher revenue, and controls greater market share than Blink Charging.

Electric vehicle charging is a competitive business. Blink Charging (previously known as Car Charging Group) acquired ECOtalitys charging network after its bankruptcy in 2013. It had 12,450 level 2 charging stations at the time. Since then, the number of Blinks charging stations has grown only to 23,000. Surely, the rate of growth has increased recently. In the first quarter itself, Blink added 1,597 new charging stations to its network. But the company hasnt been profitable so far.

Similarly, ChargePoint has been building charging stations since 2007. But it isnt profitable even now. The companys reported GAAP profit in the latest quarter was due to change in fair value of warrants and contingent liability, though it incurred loss from operations. ChargePoint expects to generate positive adjusted EBITDA in 2024.

There are several EV charging companies out there, each trying to hit profitability in its own way. The companies realize that it will be difficult to become profitable by just selling electricity. ChargePoint, for example, targets corporate customers who probably offer free charging to their employees as a perk. Another revenue source for electric charger providers is advertising, where the charging point doubles as an advertising screen.

Electric vehicle charging companies are looking at innovative ways to generate revenue. However, which of them will succeed remains to be seen.

ChargePoints revenue grew 24% year over year in the first quarter. The company expects revenue between $195 million to $205 million for its fiscal year ending Jan. 31, 2022. At its mid-point, the guidance implies 37% growth over the last year. Notably, this is lower than the 46% growth ChargePoint guided in December last year. But it isnt too concerning as COVID-related headwinds largely impacted its growth.

Blink Chargings first quarter revenue grew 72% over the year-ago quarter. But the higher growth percentage is on a low base of just $1.3 million in Q1 2020.

ChargePoint has a much bigger charging network and greater market share than Blink Charging. Blink does not seem to have any specific competitive advantage over ChargePoint right now. Blink Charging stock is trading at a much higher forward price-to-sales ratio compared to ChargePoint. 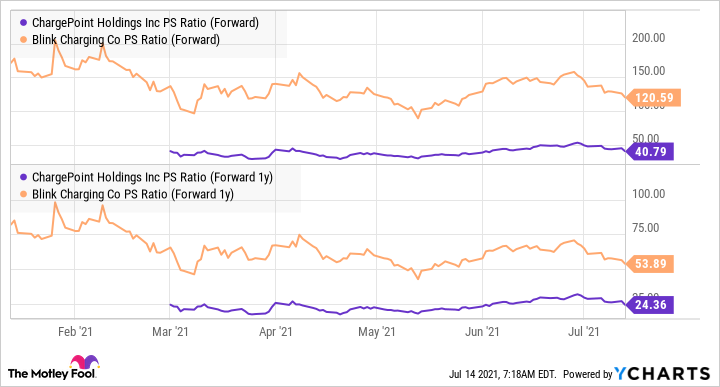 So, ChargePoint stock looks better compared to Blink Charging right now. Having said that, investors should note that both stocks entail significant risks. A price-to-sales ratio of 40 is high for ChargePoint stock too, given that it is still years away from profitability. Moreover, the stock can be volatile, as evident by a nearly 10% drop on Tuesday after the company announced a secondary offering for its existing shareholders.