A young mother, Dasha Kelly who made a GoFundMe account to raise funds for the payment of house rent, receives severe backlash after speculations of her not being the biological mother of the three girls.

As the story goes, Dasha Kelly was on the verge of eviction from her Las Vegas apartment and was clueless about how she was going to pay back her rent! Within a span of a few days, thanks to total strangers she had raised more than $230,000 through a Gofundme after her CNN interview went viral last week.

Dasha Kelly started a GoFundMe page with a goal of $2000 to prevent eviction from her home with her three daughters. In a period of mere 2 weeks, the fundraiser crossed $200,000. Kelly became overwhelmed and emotional with the kind of response she received and stated that the response made her speechless.

Dasha Kelly stated that she and her three daughters Sharon, Kia, and Imani aged 8,6,5 respectively are relieved that there will be no evictions, a constant fear with which they had been living for over a year now. She also expressed that she will be devising separate saving funds for each girl. 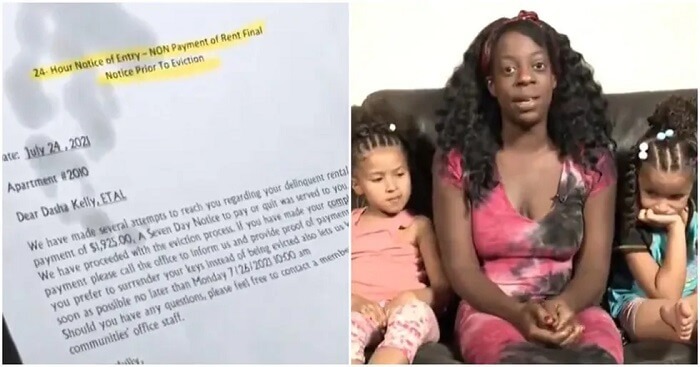 In her GoFundMe post, she had written that prior to the pandemic she had been working as a card dealer at one of the casinos of Las Vegas but since the shutdown, she had been facing a financial crisis and it was next to impossible to make ends meet.

This seems like a sweet example of generosity by Americans but hold on! There is a twist. Kelly reportedly twisted the facts to gain financial aid from the GoFundMe account. She is not the biological mother of the girls in fact the girls are of her current boyfriend.

Her sob story that won millions of hearts has reached a distraught end where she is being accused of scamming. A Facebook page with the name “Justice for Shadia Hilo” has emerged which claims that Dasha Kelly has been lying through and through about her financial ordeals and made a sob story just to gain monetary funds.

The Facebook page claims that the children are not hers. The biological parents of the children are Shadia Hilo and David Allison who is also the current boyfriend of Dasha Kelly. The real mother of the kids has come out in public and claimed that her ex and his new girlfriend used her kids to gain monetary funds.

More people have started to come out on Twitter and Facebook claiming that Dasha Kelly is a seasoned scammer. People have started to voice their concern over being scammed by these immoral practices of lying involving young children just to attain donations. The users and the donors have demanded legal action against Dasha Kelly and also remove her fundraiser from the GoFundMe website.

Since the speculation went viral that Kelly is not the biological mom of the three kids, the GoFundMe organization has held her funds from proceeding further. A GoFundMe representative stated that they are in close proximity with Dasha Kelly and are waiting for authentication from her side. Till then her funds are held and cannot be withdrawn.