Shares of Argo Blockchain (LSE: ARB) are up by more than 35% over the past month which has coincided with the resumption of Bitcoin’s value. As a cryptocurrency mining company, it is well-positioned to take advantage of Bitcoin’s surge. But is this outlook enough to buy ARB shares now? Let’s find out. 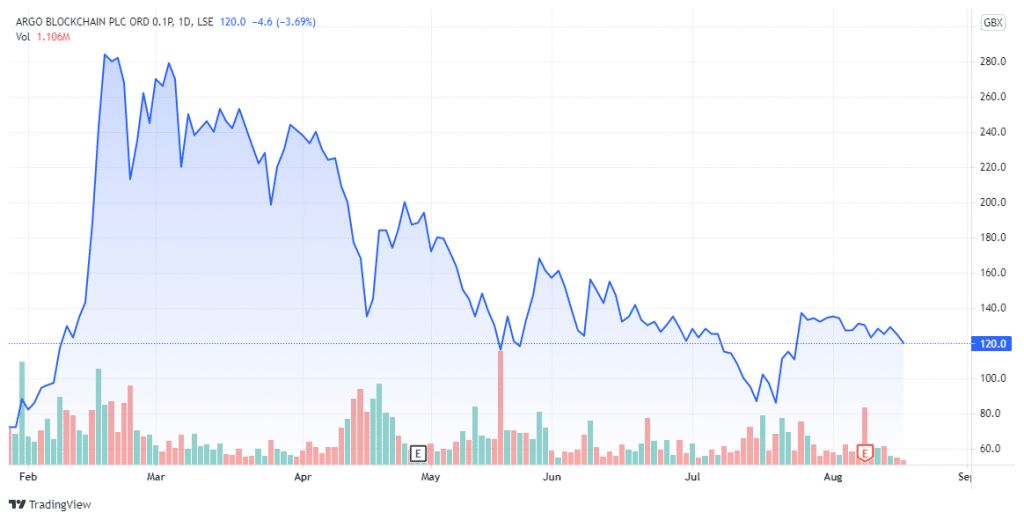 67% of all retail investor accounts lose money when trading CFDs with this provider.

Argo Blockchain grabbed the headlines recently after becoming the first cryptocurrency mining company to set objectives for being climate positive. According to statements released by the company, they are well on their to becoming carbon neutral and will take the support of outside groups to mitigate emissions. The company aims to become climate positive from scope 1, 2 and greenhouse gas emissions from its mining operations.

The company is also a participant in the Climate Neutral Now initiative headed by United Nations Framework Convention on Climate Change’s (UNFCCC). Under this initiative, Argo Blockchain would be required to measure, reduce, contribute and report emissions on an annual basis to achieve climate neutrality by 2050. Argo Blockchain also intends on releasing an annual climate report from now on.

Argo Blockchain has achieved a number of significant milestones such as the purchase of renewable energy credits, prioritising direct renewable purchases from local or on-site grids and purchasing GHC offsets for any of the companies emissions. The firm has previously signed a commercial agreement with ePIC Blockchain Technologies, which is a supplier of ASIC mining machines, allowing it to access ASIC mining rigs. Delivery of the units is set to commence in 2022, which will be built according to Argo’s specifications.

Should You Buy ARB Shares?

Investors interested in ARB shares should examine the price of Bitcoin as it has a natural correlation with Argo Blockchain shares. It provides safer exposure to some investors who think it’s safer to bet on cryptocurrencies via shares of a company instead of directly holding tokens. Apart from Bitcoin, ARB shares could get a boost from the company’s present activities. The recent half-year results are all encouraging signs for people interested in the company. Revenue grew by 180% compared to the same period last year, which helped pre-tax profits to reach £10.7 million. This is significantly larger than £0.5 million achieved in the first half of 2020.

Yet, just because the company is moving in the right direction doesn’t warrant a straight buying recommendation for investors. An expensive P/E ratio of 57 is a matter of concern. Its market cap of almost £500 million also seems to be too much, judging by its current profit and revenue figures. Currently, ARB shares are pricing in the forecasted further growth. However, there is a risk that the market is getting ahead of itself considering that the shares were trading around 6p just a year ago. Therefore investors shouldn’t invest in ARB shares at the current price levels despite strong company growth.