The relative strength index (RSI) is a technical indicator used in the analysis of financial markets. It is intended to chart the current and historical strength or weakness of a stock or market based on the closing prices of a recent trading period. The indicator should not be confused with relative strength.

The RSI is most typically used on a 14-day timeframe, measured on a scale from 0 to 100, with high and low levels marked at 70 and 30, respectively. Short or longer timeframes are used for alternately shorter or longer outlooks. High and low levels—80 and 20, or 90 and 10—occur less frequently but indicate stronger momentum.

The relative strength index was developed by J. Welles Wilder and published in a 1978 book, New Concepts in Technical Trading Systems, and in Commodities magazine (now Futures magazine) in the June 1978 issue.[1] It has become one of the most popular oscillator indices.[2]

The RSI provides signals that tell investors to buy when the security or currency is oversold and to sell when it is overbought. [3]

RSI with recommended parameters and its day-to-day optimization was tested and compared with other strategies in Marek and Šedivá (2017). The testing was randomised in time and companies (e.g., Apple, Exxon Mobile, IBM, Microsoft) and showed that RSI can still produce good results; however, in longer time it is usually overcome by the simple buy-and-hold strategy. [4]

For each trading period an upward change U or downward change D is calculated. Up periods are characterized by the close being higher than the previous close:

Conversely, a down period is characterized by the close being lower than the previous periods close (note that D is nonetheless a positive number),

Wilder originally formulated the calculation of the moving average as: newval = (prevval * (period - 1) + newdata) / period. This is fully equivalent to the aforementioned exponential smoothing. New data is simply divided by period which is equal to the alpha calculated value of 1/period. Previous average values are modified by (period -1)/period which in effect is period/period - 1/period and finally 1 - 1/period which is 1 - alpha.

If the average of D values is zero, then according to the equation, the RS value will approach infinity, so that the resulting RSI, as computed below, will approach 100.

The smoothed moving averages should be appropriately initialized with a simple moving average using the first n values in the price series. 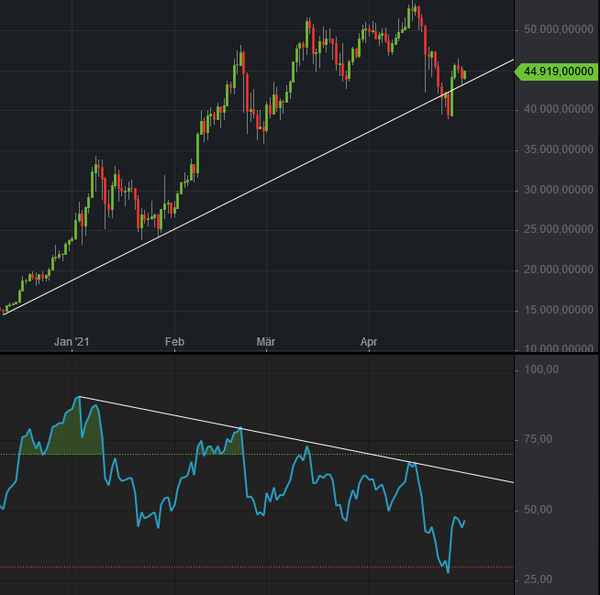 The RSI is presented on a graph above or below the price chart. The indicator has an upper line, typically at 70, a lower line at 30, and a dashed mid-line at 50. Wilder recommended a smoothing period of 14 (see exponential smoothing, i.e. α = 1/14 or N = 14).

Wilder thought that failure swings above 50 and below 50 on the RSI are strong indications of market reversals.[6] For example, assume the RSI hits 76, pulls back to 72, then rises to 77. If it falls below 72, Wilder would consider this a failure swing above 70.

In addition to Wilders original theories of RSI interpretation, Andrew Cardwell has developed several new interpretations of RSI to help determine and confirm trend. First, Cardwell noticed that uptrends generally traded between RSI 40 and 80, while downtrends usually traded between RSI 60 and 20. Cardwell observed when securities change from uptrend to downtrend and vice versa, the RSI will undergo a range shift. 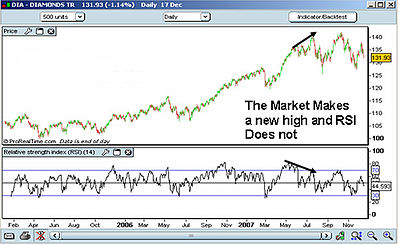 In other words, despite stronger momentum as seen by the higher high or lower low in the RSI, price could not make a higher high or lower low. This is evidence the main trend is about to resume. Cardwell noted that positive reversals only happen in uptrends while negative reversals only occur in downtrends, and therefore their existence confirms the trend.

A variation called Cutlers RSI is based on a simple moving average of U and D,[7] instead of the exponential average above. Cutler had found that since Wilder used a smoothed moving average to calculate RSI, the value of Wilders RSI depended upon where in the data file his calculations started. Cutler termed this Data Length Dependency. Cutlers RSI is not data length dependent, and returns consistent results regardless of the length of, or the starting point within a data file.

Cutlers RSI generally comes out slightly different from the normal Wilder RSI, but the two are similar, since SMA and SMMA are also similar.