Have you ever thought about the myriad of technical indicators and wondered which ones work the best? Any standard charting software supports various indicators like the Moving Average Convergence/Divergence (MACD), Relative Strength Index (RSI), Bollinger Bands, and probably a lot more. This week I’ll quantify which indicators have worked the best and worst over the past few years.

I have done these studies in the past, but environments change, and these indicators fall in an out of favor. It might be a good time to see which signals have most recently been outperforming. Also, I show a list of stocks that have recently signaled for the best performing indicators.

Below are some of the indicators that I looked at. Different traders use these indicators differently and/or in combination with other indicators. Perhaps that is why no one else tries to quantify their performance. I am taking a very basic approach to what I call a buy signal.

Quantifying the Results of Technical Indicators

For the study below, I looked at the current list of optionable stocks since 2016 and found each time a stock signaled for each indicator. The table shows the average and median stock return over the next month of trading after a signal and the percentage of time the return was positive.

I bolded the best two data points in each column and colored the worst two in red. Eyeballing the table, the RSI has been a reliable indicator over the past few years. Also, stocks pulling back to their 50-day moving average and lower Bollinger Band have also performed well.

The 200-day moving average hasn’t worked well for market technicians. Stocks crossing the moving average or pulling back to it were least likely to be positive. Returns after a Golden Cross also showed underperformance. 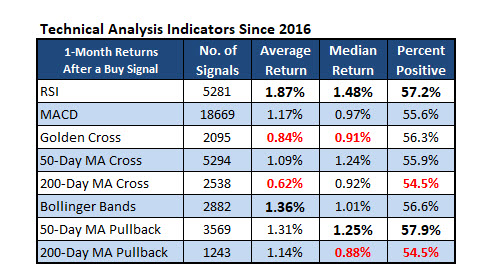 This next table is like the one above, except it only considers signals over the past 12 months. The indicators can perform differently in different trading environments, so this tells us what has and has not worked more recently.

The RSI indicator has been even better more recently than in the table above, so that’s definitely one to monitor. Interestingly, the Golden Cross indicator, which was one of the worst indicators in the table above, has performed extremely well more recently. Over the past year, stocks have been positive most often after a Golden Cross compared to any of the other signals. By every metric below, the MACD has been the worst technical indicator over the past year. 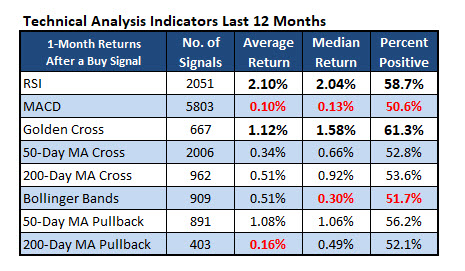 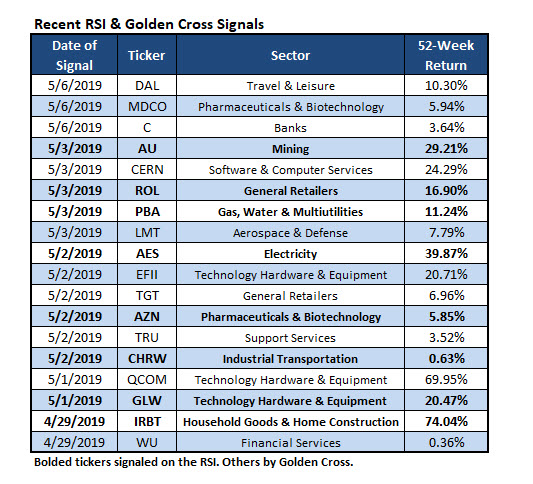