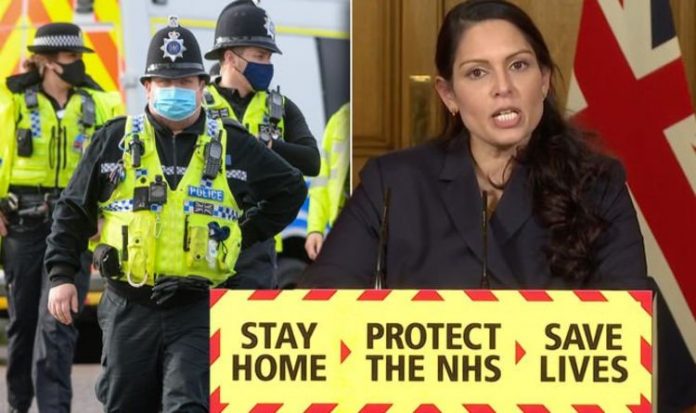 England is currently under a third national lockdown, and people have been told to stay at home once again. Under the current rules, people are only able to leave their homes for reasons deemed essential. Today Home Secretary Priti Patel announced new lockdown fines are being introduced to deter people from breaking the rules.

Priti Patel announced at a Downing Street press briefing that a new £800 fine will now be given to people who break certain lockdown rules.

The Home Secretary said the new fine will apply to people who attend house parties during lockdown.

The fine applies to anyone who decides to attend a house party during lockdown.

Ms Patel told the Downing Street press conference: “Next week we will be introducing a new £800 fine for those attending house parties, which will double for each repeat offence to a maximum level of £6,400.

“These fines will apply to those who attend illegal gatherings of more than 15 people in homes.

“The science is clear: such irresponsible behaviour poses a significant threat to public health.

“Not only to those in attendance but to our wonderful police officers who attend these events to shut them down.”

A number of fines are already in place for people who break lockdown rules.

People who break lockdown rules can be given a Fixed Penalty Notice of £200 for the first offence, while repeat offences can see fines doubled up to a maximum of £6,400.

Fines of £10,000 can also be issued to people who organise gatherings of more than 30 people, and there are also additional fines for people who break self-isolation.

An update from the Government in September stated: “New fines for those breaching self-isolation rules will start at £1,000 – bringing this in line with the penalty for breaking quarantine after international travel – but could increase to up to £10,000 for repeat offences and for the most egregious breaches, including for those preventing others from self-isolating.”

He told the Downing Street briefing: “I hope that the likelihood of an increased fine acts as a disincentive for those people who are thinking of attending or organising such events.”

He said officers will not “waste time” trying to reason with people breaking the rules in such a way.

He said: “When we see people that are putting themselves and others in danger, we will not waste time trying to reason with them.

“They are demonstrating no regard for the safety of others, or even for themselves.”

Mr Hewitt said official figures will be released next week showing how many fines have been given out since the start of the third national lockdown in England.

He told the Downing Street briefing: “Forces are telling us there has been a significant increase, and that’s reflecting the fact that we’ve had more officers out on dedicated patrols taking targeted action against those small few who are letting everybody down.”

Mr Hewitt said since regulations were introduced in late August and up to January 17, there have been 250 fixed penalty notices issued by forces in England to people who have organised a large gathering.